The Pitfalls of Late-Night Snacking – and How to Stop 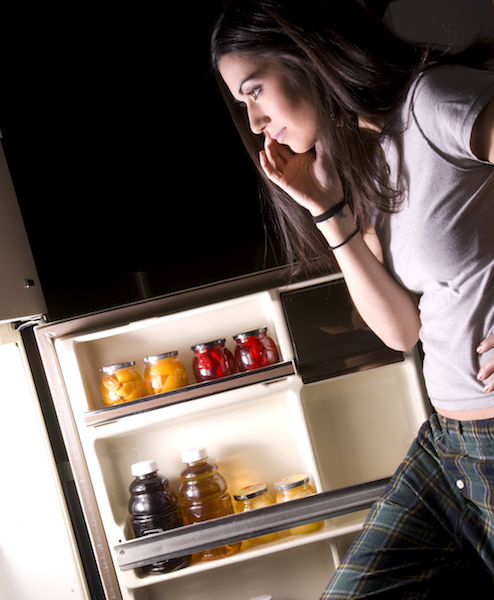 This is a fascinating article I recently read that falls directly in line with teaching I have taken promoting that “IT’S NOT WHAT WE EAT BUT WHEN WE EAT IT” .  Skipping late night eating is not the only way of losing weight but this is a great starting point that is painless. The article first appeared in the New York Times in August of this year and was written by Anahad O’Connor

Nutrition scientists have long debated the best diet for optimal health. But now some experts believe that it’s not just what we eat that’s critical for good health, but when we eat it.

Research suggests that our bodies function optimally when we align our eating patterns with our innate 24-hour cycles that tell our bodies when to wake up, eat and sleep. Studies show that chronically disrupting this rhythm — by eating late meals or nibbling on midnight snacks, for example — late night eating could be a recipe for weight gain and metabolic trouble.

That is the premise of a new book, “The Circadian Code,” by Satchin Panda, a professor at the Salk Institute and an expert on circadian rhythms research. Panda argues that people improve their metabolic health when they eat their meals in a daily 8- to 10-hour window, taking their first bite of food in the morning and their last bite early in the evening.

This approach, known as early time-restricted feeding, stems from the idea that human metabolism follows a daily rhythm, with our hormones, enzymes and digestive systems primed for food intake in the morning and afternoon. Many people, however, constantly are late night eating. They constantly snack and graze from roughly the time they wake up until shortly before they go to bed. Panda has found in his research that the average person eats over a 15-hour or longer period each day. .

That pattern of eating, he says, conflicts with our biological rhythms.

Science knows that the body has a master clock in the brain, located in the hypothalamus, that governs sleep-wake cycles in response to light exposure. A couple of decades ago, researchers discovered that there is not just one clock in the body but a collection of them. Every organ has an internal clock that governs its daily cycle of activity.

How The Bodies Clock Works

During the day, the pancreas increases production of insulin, which controls blood sugar levels, and slows down at night. The gut has a clock that regulates the daily ebb and flow of enzymes, the absorption of nutrients and the removal of waste. The communities of trillions of bacteria that comprise the microbiomes in our guts operate on a daily rhythm as well. These daily rhythms are so ingrained that they are programmed in our DNA: Studies show that in every organ, thousands of genes switch on and switch off at roughly the same time every day.

“We’ve inhabited this planet for thousands of years, and while many things have changed, there has always been one constant: Every single day the sun rises and at night it falls,” Panda said. “We’re designed to have 24-hour rhythms in our physiology and metabolism. These rhythms exist because, just like our brains need to go to sleep each night to repair, reset and rejuvenate, every organ needs to have down time to repair and reset as well.”

Most of the evidence in humans suggests that consuming the bulk of your food earlier in the day is better for your health, said Dr. Courtney Peterson, an assistant professor in the department of nutrition sciences at the University of Alabama at Birmingham. Dozens of studies demonstrate that blood sugar control is best in the morning and at its worst in the evening. We burn more calories and digest food more efficiently in the morning as well.

At night, the lack of sunlight prompts the brain to release melatonin, which prepares us for sleep. Late night eating sends a conflicting signal to the clocks in the rest of the body, that it’s still daytime.

“If you’re constantly eating at a time of day when you’re not getting bright light exposure, then the different clock systems become out of sync,” she said. “It’s like one clock is in the time zone of Japan and the other is in the U.S. It gives your metabolism conflicting signals about whether to rev up or rev down.”

Most people know what happens when we disrupt the central clock in our brains by flying across multiple time zones. Eating at the wrong time of day places similar strain on the organs which can increase the risk of disease.

“It’s well-known that by changing or disrupting our normal daily cycles, you increase your risk of many pathologies,” said Dr. Sassone-Corsi, who recently published a paper on the interplay between nutrition, metabolism and circadian rhythms.

A classic example of this is shift workers, who account for about 20% of the country’s workforce. Many frequently work overnight shifts, forcing them to eat and sleep at odd times. Nighttime shift work is linked to obesity, diabetes, some cancers and heart disease. While socioeconomic factors are likely to play a role, studies suggest that circadian disruption can directly lead to poor health

Assigning healthy adults to delay their bedtimes and wake up later raised blood pressure and impaired their insulin. Also staying up late just a few nights in a row resulted in quick weight gain and reduced insulin sensitivity.

Inspired by research, studies conducted a tightly controlled experiment in a small group of prediabetic men. In one phase of the study, the subjects ate their meals in a 12-hour daily window for five weeks. In the other phase, they were fed the same meals in a six-hour window so they could assess whether the time-restricted regimen had any health benefits unrelated to weight loss.

It did. On the time-restricted regimen, the men had lower insulin, reduced levels of oxidative stress, and significantly lower blood pressure. Their systolic pressure, the top number, fell by roughly 11 points, and their diastolic pressure dropped by 10 points.

“It was a pretty large effect.” said scientists “It was exciting but also shocking.”

Skipping dinner is not the answer. It might, however, make sense to make your dinners relatively light. Studies have shown that late night eating of large meals is more harmful than large breakfasts and smaller dinners.

This article was written by Anahad O’Connor